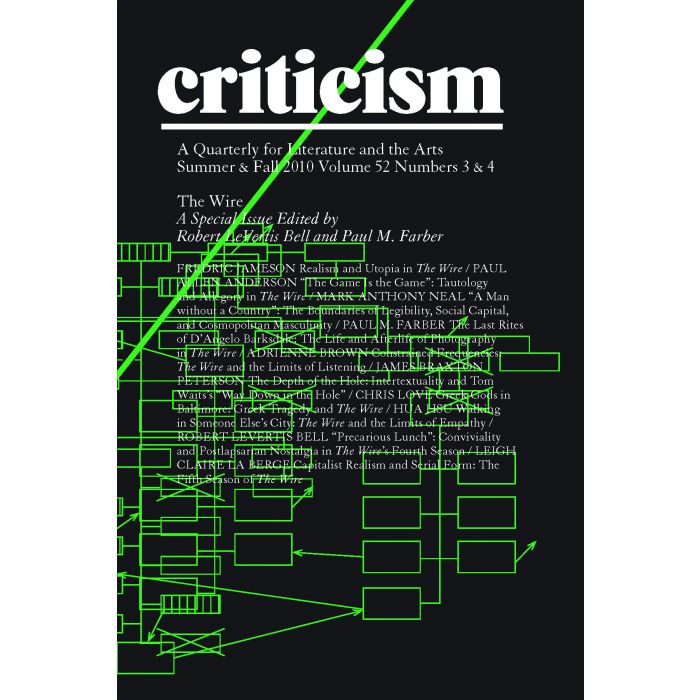 Criticism 52.3-4 is a special double issue on The Wire, the HBO series heralded by many critics as the greatest television show of all time. This issue first grew out of an interdisciplinary symposium at the University of Michigan called "Heart of the City: Black Urban Life on The Wire," held 29-30 January 2009. The issue features several essays first shared at the symposium, as well as ones written expressly for this issue. Each essay considers a formal concept or organizing principle of the series, and extrapolates and explores an argument therein.

Realism and Utopia in The Wire
Frederic Jameson

"The Game is the Game": Tautology and Allegory in The Wire
Paul Allen Anderson

"A Man Without a Country": The Boundaries of Legibility, Social Capital, and Cosmopolitan Masculinity
Mark Anthony Neal

The Last Rites of D'Angelo Barksdale: The Life and Afterlife of Photography in The Wire
Paul M. Farber

Constrained Frequencies: The Wire and the Limits of LIstening
Adrienne Brown

The Depth of the Hole: Intertextuality and Tom Waits's "Way Down in the Hole"
James Braxton Peterson

Walking in Someone Else's City: The WIre and the Limits of Empathy
Hua Hsu